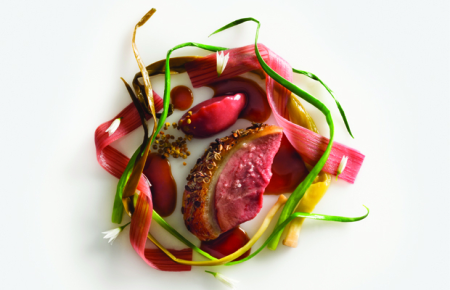 The list is here! For many, the announcement of the Top 50 Restaurants in the World is a harbinger of vacations to come, and entire trips are planned around a twelve course tasting menu. Snagging a reservation at any of the restaurants on the 2017 list is hard enough, but a new trend has emerged making just getting to some of these gastronomic paradises even more difficult.

A tasting plate at Eleven Madison Park, named the best restaurant in the world for 2017. Image source theworlds50best.com

In past decades, a majority of the restaurants honored on the San Pellegrino Top 50 Restaurants list were (and still are) in the expected culinary destinations of the world: London, New York, and, of course, Paris. Each of these cities is also an economic capital of the world, so it comes as no surprise that where the wealthy live and work is where they eat. The restaurants that emerge in these cities rely on their affluent citizens to sustain them year after year. In line with that expectation, Tokyo’s notoriety for fine dining came only after years of sustain economic growth throughout the 1990s.

However, recent years have seen restaurants added to this list from unexpected places without the support of sustained economic growth or a concentration of high net worth individuals. Wealth-X, a leader in global wealth research, explains that social media has “super-charged” word of mouth, meaning that the sharing of reviews and the awareness of awards makes the remote locations of some of the newest top restaurants a destination for the jetsetting crowd. As Winston Chesterfield, custom research director for Wealth-X, notes:

An entry in the list acts as a siren call to luxury concierges, jetsetters, and the world’s elite – and as such, almost guarantees full tables for the next 12 months.

The native, resident populations are, most often, not the focus for these modern marvels of food. Though they are, no doubt, a discerning group whose palates often inspire the innovative menus, the close presence of internationally renowned, multi-starred, celebrity-visited establishments is largely inexplicable and as remote from their existence as the cities from which these international individuals visit.

These individuals are the intended, the chosen ones. The premium-cabin-flying, luxury experience nomads, whose moving meccas are the next travel experience, the next luxury hotel concept, the next cuisine. These experiences have become as much a currency as the designer wallets which they plonk on the tables, and perhaps even more so than the motor cars they arrive in.

Read more about the changing trends in fine dining and where your clients may be eating next at LuxurySociety.com.